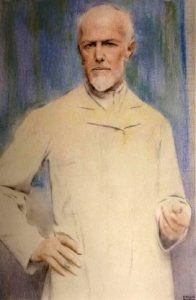 The Abandoned City
I Lock The Door Upon Myself
Who Shall Deliver Me? (Christina Georgina Rossetti)

1891 I Lock the Door upon Myself, Munich, Neue Pinakothek

1891 Who Shall Deliver Me, Paris, Private Collection

1858 Born near Termonde, Belgium the son of a wealthy Austrian aristocrat. His early life is in Bruges.

1875 Khnopff abandons law school and begins his studies at the Académie Royale des Beaux-Arts in Brussels.

1878 Visits the Exposition Universelle in Paris and discovers the work of Gustave Moreau and Edward Burne-Jones who will both be a lasting influence on his art.

1881 First works exhibited at the Salon de l’Essor in Brussels.

1883 He is a founder member of Les XX, perhaps the most avant-garde group of artists in Europe. He exhibits a number of Symbolist works. Also exhibits at the Paris Salon for the first time.

1887 Paints a portrait of his sister Marguerite which he keeps in a prominent place his studio until his death.

1888 Exhibits Memories at Les XX – a painting depicting a number of women in different attire, all based on photographs of his sister. At about this time he makes contact with Edward Burne-Jones and G.F.Watts.

1891 Starts to visit Britain annually and to exhibit there regularly. Creates two paintings inspired by Christina Rossetti’s poetry – I lock the Door upon Myself and Who Shall Deliver Me.

1894 Exhibits for the first time at the Munich Secession. Les XX is dissolved.

1900-1902 Designs a House and Studio for himself (‘a temple of the self’) inspired by the Vienna Secession.

1904 Khnopff is commissioned to decorate the ceiling of the Salle des Mariages of the Hotel de Ville in the commune of St Gilles. He is also working for the Théâtre de la Monnaie in Brussels as a set designer.