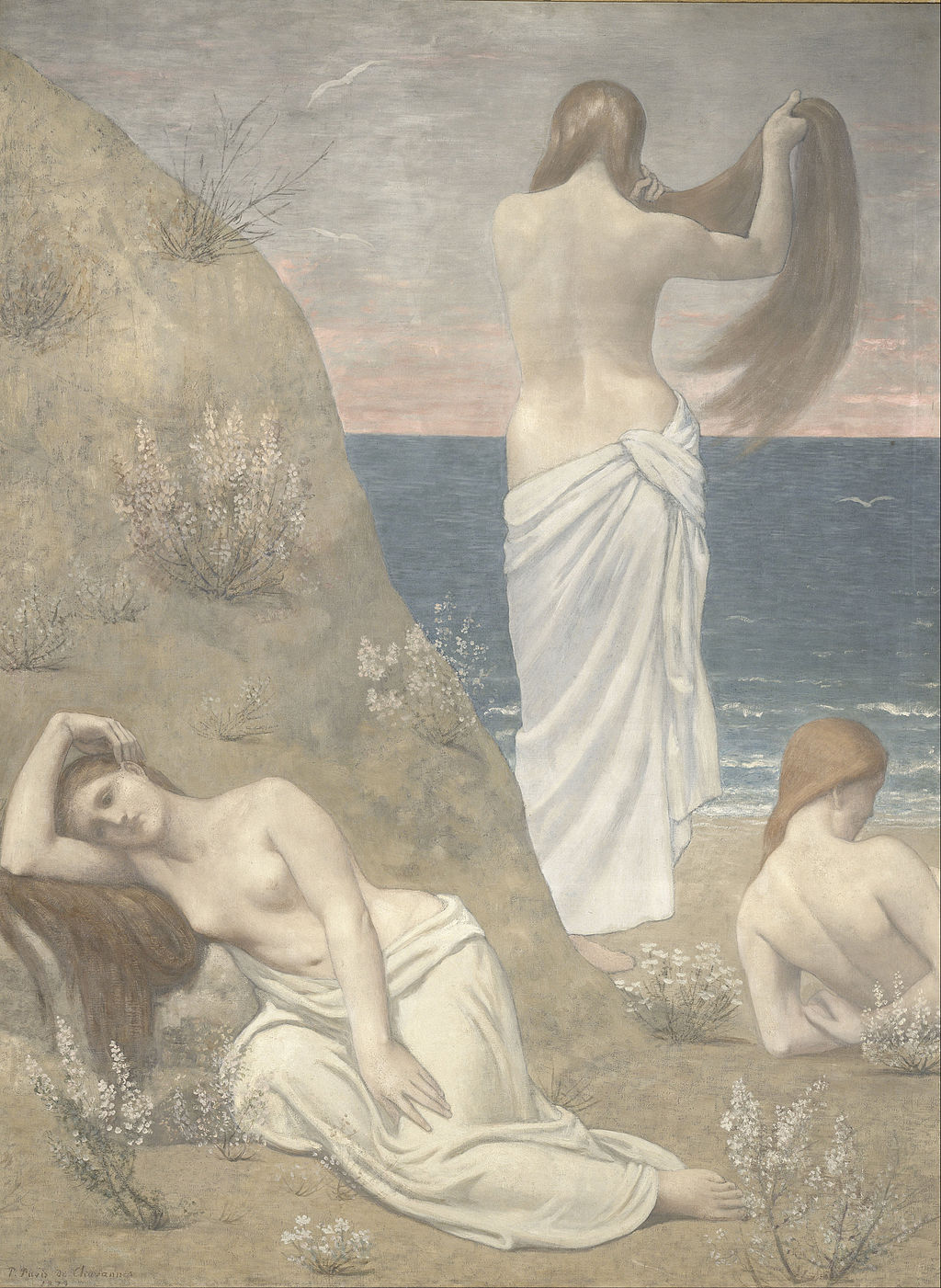 Pierre Puvis de Chavannes is a difficult artist to categorise or pigeonhole. This is part of his appeal. A personal fortune allowed him to follow his own path, freed from the necessity to compromise his style in order to attract commissions and able to weather the storms of critical condemnation. He was both fêted and castigated by the critics: attacked by many conservatives for his restricted palette, his disinterest in realism and his poor draughtsmanship, he was praised by other traditionalists for delivering French academicism from the stultifying clutches of ultra conservative painters such as Bouguereau and Cabanel. At the same time he was associated with modernity and praised by progressive opinion for his distinctive, decorative approach in which perspective often played a subordinate role to the importance of the surface plane. He was able to bestride both camps. For the critic Emile Cardon, responding to one of Puvis’ works displayed at the Salon in 1881 it ‘… left no one indifferent… All I know is that it is imprinted with an irresistible and poignant poetry to which one submits and which escapes all analysis and reason.’ The same critic when reviewing Young Girls by the Seashore two years earlier asserted that it was ‘a vague and untranslatable melody, which penetrates the soul and escapes brutal analysis’. Even though Cardon was obviously deeply affected by these paintings, he nevertheless found it difficult to analyse the reasons for his enthusiasm – Puvis’ paintings refused to fit into easy categories.

It is no surprise that Puvis was adopted by the Symbolists; he was seen (along with Gustave Moreau and Edward Burne-Jones) as a harbinger, a precursor, for a movement of writers and painters who were characterised by an interest in the irrational and the ambiguous, by a distrust of realism and an enthusiasm for dreams and visions. Puvis explained ‘I take the thought which lies in an emotion. I roll it and roll it, until it… appears with as much clarity as possible. I look for a view which precisely conveys this… This is Symbolism if you like.’ He also became a highly influential figure for another later generation of painters; Gauguin, Seurat, Signac, Picasso and Matisse were just a few of his ardent admirers whose works, in different ways, betray a debt to his ideas and methods.

Young Girls by the Seashore provides a good example of why the Symbolists and the avant-garde so admired Puvis. Three young semi-naked women inhabit a strange littoral landscape dotted with sparse, flowering, Mediterranean maquis. A rather peculiar hillock rises steeply from the strand partially blocking our view of the sea. To the right, one of the women lies on the sandy shore, her lower torso unseen beyond the picture frame (betraying the influence of photography). Her stare seems fixed at the near distance – she is lost in her own thoughts. The central, standing, figure gazes out to sea whilst engaged in arranging her improbably long hair. The third member of the group, leaning on her equally luxuriant chestnut tresses, is lost in intense melancholic introspection. There is no interaction between the three. The opalescent, overcast sky admits a pink stain from the setting sun on the horizon. The calm sea laps metronomically on the shore, adding to the the feeling of languor. A single gull glides over the serene water.

The picture has no ‘subject’, rather it creates a mood – it is an evocation of a timeless personal idyll where the women (as the poet Théodore de Banville wrote) ‘let down their hair and dream, naked before the immobile waves, where nothing will ever stir, under an unchangeable sky, in an atmosphere without movement or life’.